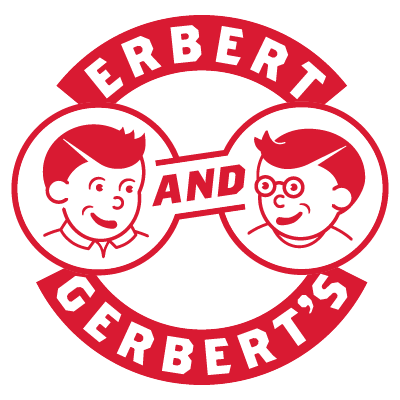 The sandwich industry is extremely assimilated. The same ingredients on the same breads with the same sides. This isn't the case with Erbert and Gerbert's. We believe in BOLD and Adventurous Sandwiches and Soups. Differentiating the brand in this way has carved out a space for us to connect with our consumers in ways the rest of the industry can’t.

A quirky line that underlines our ingredient story of bold flavors and interesting sandwich combinations. This is our niche in the category.  We create adventurous tasting sandwiches for adventure craving people.

We’re big on community at Erbert and Gerbert’s, and that means a few different things. We cultivate a community centered around our franchise owners, with direct, mutually beneficial teamwork between the corporate team and franchisees.

STORE FOOTPRINT TO FIT YOUR NEEDS

The Erbert and Gerbert’s story begins with a...story. The story of a father who regaled his ten children with the adventures of Erbert and Gerbert Herbert. Two small boys who traversed the universe in search of adventure, but found things much more valuable--wisdom, kindness, and most importantly, friendship.

The tales David Schippers told his children weren’t just entertainment, they were life lessons. Lessons his son, Kevin Schippers, wanted to pass on to the world through his love of stories. Stories he turned into sandwiches that have captivated customers for 35 years. Just like those stories did for those ten children all those years ago.

We appreciate, respect, and serve each other and our communities.

We know how to have fun, but not until our work is done.

WHAT'S NEEDED TO GET STARTED?

Ambition and drive to succeed

Looking to be a part of the community

"Well, I love the product, so it is an easy sell for me. I looked at some other franchises and there was a little more involved. I needed something to be able to scale and this allowed that."

"When you walk in the door of an Erbert & Gerbert's, you just get this feeling. It's warm, it's welcoming!"

"After meeting the [executive] staff at a Discovery Day, there is a definite passion for this brand. I found myself selling other people on Erbert & Gerbert's before I even owned one!"

Fill out the form below for more information